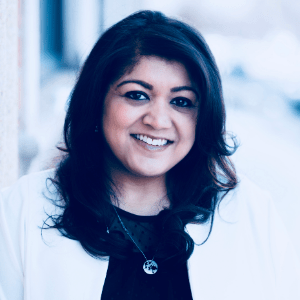 Dimple Dhabalia's work encompasses 20-years of working in public service and the humanitarian sector, focusing on asylum and refugee related policies and operations. Dimple began her role as a Senior Advisor to the Refugee Asylum and International Operations Directorate (RAIO) in March 2016. Since beginning her federal career as an asylum officer in 2004, Dimple has served in a variety of positions within RAIO at both the field and headquarters levels and has lived or worked in over 40 countries.

As a result of her own experiences with compassion and bureaucratic fatigue, combined with burnout and secondary trauma from working with vulnerable populations, Dimple identified a need for more resilience-based training for individuals working at the crossroads of the government and humanitarian sectors. In 2017 she launched a directorate-wide resilience and well-being program called RAIO Thrive. The mission of RAIO Thrive is to provide the workforce with traditional and innovative tools and resources to create a culture of resilience, support greater work/life harmony, and move from surviving to thriving. Since its launch, the RAIO Thrive program has expanded from an online Sharepoint site with links to resources, to a full program with rotational staff assignments, a weekly in-house mindfulness session, and in-person trainings based in mindfulness and positive psychology.

Prior to joining the federal government, Dimple worked as an Assistant Attorney General representing the Department of Human Services at the Colorado Attorney General’s Office. Dimple has a J.D. from the University of Denver, College of Law and a B.A. in Institutions and Policies from William Jewell College and Oxford University.