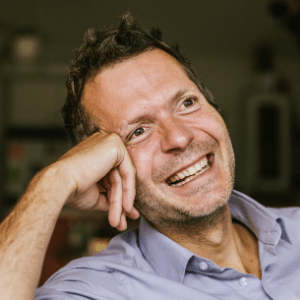 Frederic Laloux tries to square, not always easily, the many projects he is passionate about with his inner knowing that he is meant to live a simple life, spending much time with his family and whenever possible in the silent presence of trees.

Frederic’s book Reinventing Organizations has sold more than 500,000 copies and is considered by many to be the most influential business book of this decade. Described as “groundbreaking,” “world-changing,” and “a leap in management thinking” by some of the most respected scholars of management and human development, it has sparked a global movement with hundreds, probably thousands of organizations adopting radically more powerful and soulful management practices.

A former Associate Partner with McKinsey & Company, Laloux holds an MBA from INSEAD, and a degree in coaching from Newfield Network in Boulder, Colorado. He has traveled widely and speaks five languages. Frederic Laloux lives in Ithaca, NY, USA, where he is blessed to share his life with his wife, Hélène, and their two children.