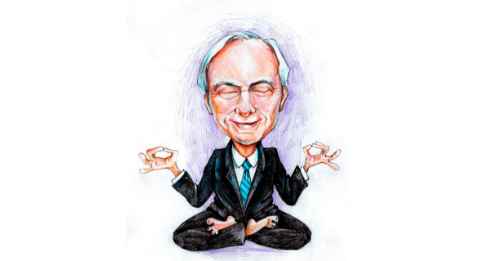 The billionaire Ray Dalio founded Bridgewater Associates, the largest hedge-fund, in 1975. His net worth is $18.4 billion.  In 2017 tweeted:  “Transcendental Meditation has probably been the single most important reason for whatever success I’ve had...”.

On May 7th, Dalio hosted a candid Reddit AMA (Ask Me Anything), during which people on Reddit could ask him any questions they’d like. He began the Q&A by posting: “I’m Ray Dalio---founder of Bridgewater Associates. I’m interested in how reality works and having principles for dealing with it well--especially about life, work, economics, and investments. Ask me about these things---or anything.”

Some Redditors asked him for investment advice, while others wanted to know more about his company’s work culture and any advice he might have for CEOs.

Here are six highlights from the Reddit AMA that I found valuable.

The key to all good relationships is being clear about how you’re going to be with each other and then doing that. I would encourage you to have organized conversations (or at least one conversation) with the people you work with about that.

I guarantee you that you will have a fascinating conversation, and you might even come out of it with clear principles that you can agree on. However, if you can’t agree on how you should be with each other because your principles are different, you can always go somewhere else where the principles are more aligned.”

2. Dalio also spent time explaining what he means by “the art of thoughtful disagreement.”

If I could change anything, it would be that individuals understand that thoughtful disagreement can be a path toward idea meritocratic decision-making that gets people past their disagreements onto doing the best things for themselves individually and collectively.”

3. Khaledwas asked about the use and validity of personality and assessment tools.

Scientifically. Think of these assessments as basically well-thought out questions which are going to be so much better than your or others' random questions in getting to know what someone is like. Since the random questions are the alternative to these thought-out questions that also have statistics behind them, it seems to me that most people are going to want to take them and see what they tell them about themselves and others.

I don't take these summaries as definitive, but I do take them worth of discussion with the people whose preferences they are profiling. I ask them whether these assessment results ring true to them and then have discussion with them about the results. I have used them in many thousands of interactions and have found them to be invaluable.

5. User Trachea asked about how Ray developed his respectful and in-tune interview presence and if he is the same off camera.

I would say that I acquired the way of operating that you described in my 30s, and yes it is the same with people in all settings. I think I acquired it in the markets and in life because I found that to not be balanced and to not see all perspectives would be painfully costly. One might say that being this way was beaten into me by my interactions with reality. Also, meditating helped me a lot. And writing down my principles for dealing with situations helped me see how the same things would happen over and over again in an almost mechanical way that allowed me to look down on myself and my circumstances from a higher, more dispassionate level. I find a lot of people are caught within the circumstance that they're in and have challenges putting those in perspective and dealing with them in a principled way. I think that once one gets in the habit of looking at everything as "another one of those" (rather than each thing individually) and thinking about the principles for dealing with it, one naturally gets in the habit of operating the way you describe.

6. As lastly, Monopolization asked "You have 10 minutes with yourself from 20 years ago. What info do you give him and why?"

While it's a bit more than 20 years ago, the big message I would want to have given myself is "Why are you so stupidly arrogant!?!" That was in 1982 when I was 33, and I would have told myself you can be worlds smarter and raise your chances of making better decisions if you could simply be humble and worried enough about being wrong to have the smartest people who are willing to disagree with you and challenge you so that you could examine their reasoning.

Photo by ValueWalk / CC BY