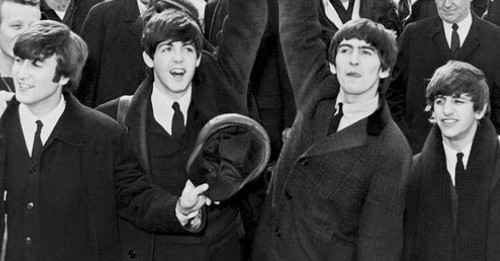 I've recently have had a great many questions spurred on by some of the critics of what is happening with Mindfulness. My conversations with folks like Professor Ron Purser, Professor Candy Brown, Assistant Professor Jaime Kucinskas, Professor David Forbes, and independent scholar Glenn Wallis have me thirsty for more intellectual debate. When it comes to mindfulness & meditation where can we find good debate and discussion? Have we created a tone that welcomes dialogue or that silences dissonance? The more I search, the more concerned I am. Much of the conversation is dumbed down, celebrity-driven, or profit-driven.

So you can image how thrilled I was to find a stimulating debate and from a source of inspiration, I hardly expected.  Back in the- nineties when my high school peers were listening to rap, Nirvana or Guns, and Roses I was obsessed with the Beatles. I consumed all of the Beatles music I could find and would dream of jamming out with the Beatles.

On a random YouTube suggested a video, (probably because the AI engines have tagged me as a Beatles & Meditation fanatic) I stumbled across this video. Based on my internet sleuthing, its the audio file from a 1967 show hosted by popular British talk show host David Frost. In it, he has invited back John Lennon and George Harrison to the TV Studio in London for a second interview exploring the subject of Transcendental Meditation, this time included a Q&A with some of the leading intellectuals including writer John Mortimer.

I was beside myself, practically drooling... A popular TV show, with two of the biggest celebrities of their time, having a meaningful and stimulating conversation around meditation with intellectuals. I've highlighted some lines that stood out to me below. The full discussion is transcribed here and is worth reviewing.

The most provocative part of the show starts when John Mortimer jumps in at about the 35-minute mark.

Some segments that stood out:

“I think you've really got to judge these beliefs by their pragmatic effect, and the amount of good they're going to do in the world. And what worries me, very much about this attitude, is that it seems to be tremendously self-involved, and finally, tremendously selfish. And, the idea of sitting very quietly perfecting yourself, while everybody else goes to hell around you... we're in a great crisis of history. And if we all wait to perfect ourselves, nothing will be done about it.”

...whereas the meditation, you go beyond this ordinary experience that's on the relative level of experience, it's beyond that. And this is why you can't tell the people about it really, it's something that if they did it themselves, then they'd know because they'd actually experience the thing. You can't talk about an abstract experience, you can't really put it into words

Must you not improve yourself first? Take the problem of war. We all want peace, I mean except idiotic people who... or evil people. But, first, if we work for peace, we cannot truly work for peace unless we have peace in ourselves, unless we have love in ourselves. Then, you can work for peace, and you can be crucified if necessary, it is. But you cannot suffer and work, finally, and this is the solution of the modern world, what we might call Christian communism.

At that point let me go back to John and George. I mean, is this fair the parallel that's being drawn here, between your sort of, getting very involved with meditation, and that somehow being very very selfish, and not caring about the world.

No, what they're saying about selfishness is it sounds as though you're going to sit down in silence all the time. You know, you do it in the morning, say, to do your day's action, whatever it is, better. But you're putting it down, saying, "we can't sit down contemplating our navels, while all this is going on." The whole point of doing it is to have more energy and more control over yourself, to be able to do whatever action you want to do.

It's really surprising how much of what was discussed is relevant today. It is incredibly refreshing to hear a thought-provoking, respectful debate. Where can we find more of this today?

Sounds quality is a bit rough at the start - John Mortimer starts in around 35 minutes.