How to Unlock your Company’s Collective Intelligence with Mindfulness

The concept of collective intelligence—the capability of a group of people to solve complex problems—is not new. But the increasing interconnectedness of knowledge work and the growing variety of problems have raised the profile of collective intelligence as a competitive differentiator. So, companies need to understand the concept more systematically and scientifically.

Companies today must manage rapid innovation cycles and the deep interconnectedness of knowledge work. To address the challenges, many companies are investing in setting up cross-functional, agile teams. But to transition to truly dynamic ways of working, a company must fundamentally transform how cross-functional teams interact and collaborate. This requires bringing forth an emergent property of their system: the collective intelligence of their teams

We define collective intelligence as a group’s ability to perform the wide variety of tasks required to solve complex problems. Collective intelligence is not dependent on team members’ IQ, knowledge, or ability to think logically or on the team’s composition. Instead, it is largely driven by team members’ unconscious processing: their emotional intelligence (people’s awareness of, and ability to manage, their own emotions and those of others) and emergent properties such as trust, emotional and psychological safety, and equality of participation. This description is supported by studies conducted by the MIT Center for Collective Intelligence and Google’s Project Aristotle. BCG’s experience across a large number of transformations to new ways of working and agile methods also points to emotional and noncognitive factors as the key drivers of collective intelligence.

Tapping into the Power of Diversity

Diversity is among the foundational elements of a team’s collective intelligence. In this context, diversity should not be limited to gender or functional and educational backgrounds. What’s required is a diversity of cognitive styles—that is, different ways of thinking about, perceiving, and remembering information or simply different ways of solving problems or seeing the world.

To tap into the power of diversity—with respect to both expertise and world views—a company must create an environment in which individuals are willing to risk stating their opinions and to be receptive to listening to others. This requires integrating a team’s diversity.

Teams whose members are not well-integrated exhibit many dysfunctions. Members often lack a sense of joint purpose and struggle to engage in teamwork. The failure to properly integrate a team’s diversity can actually diminish its collective intelligence.

Companies already apply approaches that foster collective intelligence. They are increasingly proficient at setting up diverse teams, breaking down organizational silos, and implementing open information systems. However, companies often do not explicitly recognize how these efforts relate to collective intelligence and thus they fail to capture the full benefits.

Most notably, companies are not doing enough to identify and address inadequate emotional safety and trust among team members. That is because most companies are not sufficiently aware of people’s unconscious interactions and do not understand how unconscious factors influence team performance. Most companies also lack the skills and perseverance to constructively address issues related to emotional safety and trust.

Mindfulness provides a potential solution for meeting these challenges. Many companies have introduced mindfulness into their organizations, primarily to help their employees maintain well-being and improve their clarity of thinking, cognitive abilities, and ability to stay calm. However, only a few organizations (progressive entities including the European Commission, Google, Hilti, and SAP) have also applied mindfulness to transform the collective capabilities of teams. 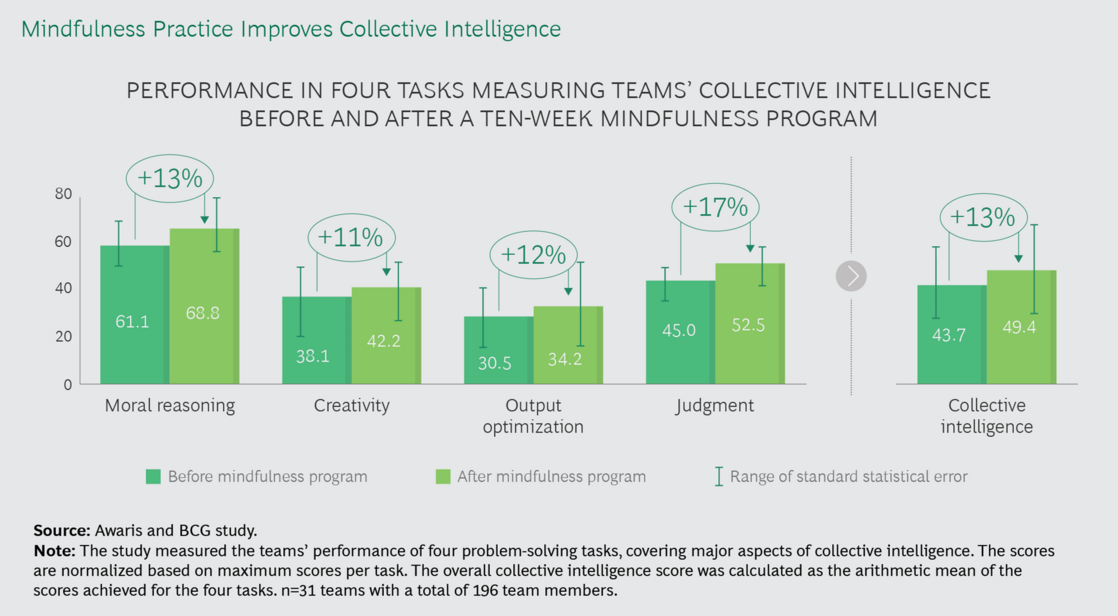 Mindfulness practice fosters collective intelligence by allowing us to redirect our mental attention skills (for example, capabilities of the working memory or our ability to focus on the task at hand) toward more expansive, awareness-based skills. More specifically, mindfulness practice strongly influences a person’s self-awareness of the body’s internal state (interoception) and mental processes (metacognition). Interoception and metacognition help us regulate our reactions to emotions and behaviors. By improving our ability to get in touch with our own emotions, we also enhance empathy—our ability to vicariously share the experiences of others.

To use mindfulness to foster collective intelligence, a company must take three steps.

Following a successful pilot, a company can adapt mindfulness training and habits to suit its culture and roll out a program across the organization. To convince the skeptics, it is essential to apply deep expertise in mindfulness training. Those companies that succeed will fully realize their collective intelligence and thereby reap the rewards of new ways of working and cross-functional teaming.

Sidebar: About the Study

Thirty-one teams, composed primarily of people with managerial responsibilities, participated in a ten-week mindfulness training program that was specifically adapted to the work context. The study focused on investigating whether a team’s collective intelligence can be enhanced by mindfulness training of its members.

To measure collective intelligence, we used a set of four diverse tasks developed for this purpose by the MIT Center for Collective Intelligence:

The selection of the tasks was based on Joseph McGrath’s model of group tasks. This ensured that we covered major aspects of collective intelligence, such as decision making, task execution, generation of innovative ideas, and negotiation.

In the first session of the program, we randomly assigned one, or in some cases two, of the tasks to each team. We scored each team’s performance of its task. During this initial session, we also conducted an individual assessment of each team member’s mindfulness (using the “Five Facet Mindfulness Questionnaire”) and emotional intelligence (using the “Reading the Mind in the Eyes” test).

In the final session of the mindfulness program, we repeated the process. We asked each team to perform one or two of the tasks that it had not previously performed. We then scored its performance on the new task and conducted another assessment of mindfulness and emotional intelligence.

Boston Consulting Group partners with leaders in business and society to tackle their most important challenges and capture their greatest opportunities. Today, we help clients with total transformation—inspiring complex change, enabling organizations to grow, building competitive advantage, and driving bottom-line impact. Awaris is a leadership development company that combines scientifically proven mindfulness-based interventions with mindset and behavioral changes in the context of complex environments. Awaris engages with clients in a variety of ways, including face-to-face training that applies blended learning formats, retreats, and train-the-trainer courses.

IRest Yoga Nidra provides the relatability of meditation in a comfortable way. It is well researched ,comprehensive and adaptable to any type of environment. What type of mindfulness trying to you recommend?

Hi Lisa! We're fascinated by iRest Yoga Nidra too - we've been lucky to hear from Dr. Richard Miller at previous Mindful Leader summits. I've reached out to the authors of this article to hear what they recommend.

sooo focusing and concerning  thanks a lot