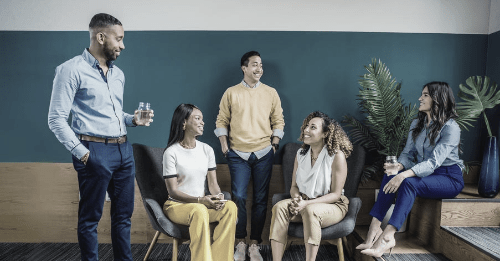 This is part of a series. You can find the first article here.

Strategic leadership is the ability to handle complex problems: where there is no obvious or facile solution, the stakes are high, and collaboration with others is essential. In this series for Mindful Leader, we are exploring the seven challenges, based in the mind and brain, which strategic leaders can expect to face as they move through their careers.

You’re running a video call to coordinate progress against deadlines, and someone who reports to you dials in late. The project is on a very tight leash, and yet they have had another unexpected delay. It will set you back another week. Your anger and frustration finally overwhelms you, and you shout, “How am I supposed to get anything done?” – and then realize that all the participants have gone silent.

Or maybe, in a seeming uncontrollable bout of anxiety, you take the blame for every lost sale this quarter. Or you lash out, in mercilessly steely tones, at a subordinate who accidentally interrupted you.

In all these cases, looking back, you regret the outburst – the loss of control over your impulse and emotions -- but only slightly. You recognize that other people may think less of you, or be a bit scared of you, but they all know this isn’t the real you. Ordinarily, you are competent, reliable, and even known as a humanitarian. You may even defend your impulses as passionate, or a form of tough love. As Michael Jordan put in The Last Dance, these outbursts help you drive the team past its limits, “pulling people along when they didn’t want to be pulled.”

But the neuroscience of leadership tells us differently. Outbursts of this sort, whether directed at yourself or others, harm the psychological safety of the room, even if you don’t intend to do so. They not only impair your own leadership, but that of everyone around you, and they make it easier to make errors of judgment -- for example, in that impulsive state, it’s easier to misperceive what others are thinking. Even in companies where you’re encouraged to bring your whole self to work – because they need your creativity, energy, and commitment – it would be a non-starter to feature that part of yourself that paces anxiously back and forth.

Fortunately, for those who aspire to strategic leadership in an organization, it’s possible to learn the skills of executive function (EF). Even more valuable, it may be feasible to design organizations to foster those skills throughout the hierarchy. The executive functions of the mind and brain are a group of capabilities associated with the lateral prefrontal cortex. Together, they enhance the purposeful, goal-oriented behavior, steadfast presence and self-control for which influential and successful leaders are known. A high level of competence in these skills tends to correlate with achievement in general – including test scores and salaries, which helps explain why they have been studied so much.

“Executive functions can be improved,” says Adele Diamond, professor of neuroscience at the University of British Columbia, “at every age from infants through elders and via diverse approaches.” One of the world’s leading scholars of executive functions, she has led a team of researchers to track and assess hundreds of relevant experiments and assessments during the past two decades. “However, we do not know how much they can be improved, how long benefits last, or what determines the improvement.”

Diamond’s model of EFs focuses on three core capabilities: cognitive flexibility (ease in shifting perspectives and adjusting to new challenges and opportunities), working memory (mentally processing multiple levels of information at one time, and relating them to each other), and inhibitory control (overriding impulses and emotions when necessary). All three of these can be thought of as mental habits which, much like physical exercise, feel uncomfortable when you’re not used to them, but gradually become second nature when you practice them regularly.

The word executive means similar things in neuroscience and business. It refers to the ability to marshal resources in a complex goal-directed fashion: planning, deferring gratification, dealing with ambiguous issues, and looking at things from multiple perspectives, all for the sake of accomplishing (“executing”) difficult and multifaceted tasks. Research on the development of this function essentially began at Harvard in the late 1970s, when psychologist Jerry Kagan noticed that babies all over the world experience similar cognitive changes, like separation anxiety, at the same age. He was Adele Diamond’s doctoral advisor, and he sparked Diamond’s interest in studying children’s cognitive development, which she has continued through the present day. Some aspects, such as the effect of music on executive functions, were so broadly based that she could move beyond children to also study their impact on adults, from young adults to the elderly.

It used to be taken for granted that executive functions were predetermined: some people were naturally even-tempered while others were high-strung from birth, and there wasn’t much you could do to change it. But now, thanks to the many research efforts and studies that Diamond has chronicled and evaluated, there are clues to what works and doesn’t work in developing executive function.

Many of her conclusions seem counterintuitive at first glance. For instance, you would think that the computer games associated with expanding working memory – brain-teaser-style computer game systems like CogMed, which surfaced in the early 2000s with claims such as slowing dementia or reducing ADHD symptoms -- would have broad impact on executive functions. But they tend to produce what Diamond calls “narrow transfer.” They affect only the very precise capabilities related to the particular computer games played. A spatial memory game, for instance, will generally not help build verbal memory, and vice versa.

You might also think that physical exercise has a positive effect on executive function. But here, too, the effects are either narrow or inconclusive. People in good physical shape tend to have stronger executive functions, but when people engage in aerobics, weightlifting, or solitary sports, it doesn’t seem to help those functions improve. One factor that may make more of a difference is sleep; if you increase your sleeping hours from 5 to 7 on average, you may find your executive functions dramatically improve.

Diamond mentioned four direct approaches that seem to have broad, consistent effect, although she cautioned that the research is still not conclusive on any of them. The first approach is the use of mindful movement activities like tai chi, taekwondo, and qi gong, in which performers pay close and precise attention to their bodily movements during practice. Solitary sitting meditation alone has not yet been demonstrated to have the same effect on EFs (though it has been shown to have many related salutary effects). Nor has yoga; some studies have found EF benefits but just as many have not.

The second approach is to foster learning-oriented relationships, where people help each other develop executive function. CogMed sessions with an active mentor or trainer produce more executive function improvement than computer-based executive training programs with no in-person mentoring. Having human sponsors in recovery programs may be important for the same reason, and it also helps explain why other methods for improving executive functions -- such as non-computerized cognitive training or some promising school programs, such as MindUP -- show better executive function results (albeit still less than mindfulness activities involving movement).

The third approach is to encourage emotional commitment to what you’re doing. Playing a sport you love is more likely to improve your executive functions than just doing calisthenics. The same is true for your livelihood. If you want your executive functions continually activated and improving, choose work you love, where what you do every day has intrinsic value to you.

The least studied of the four approaches is to become more explicitly aware of the value of building the skills related to executive function. Executive functions may be similar to Carol Dweck’s “growth mindset” concept in this respect: they are easier to develop when people understand why they are doing this.

These last two, which have to do with peoples’ attitudes about their tasks, are not backed up by empirical evidence; they remain hypotheses. But Diamond still considers them likely factors. “Years ago,” she recalls,  “somebody did a study of taekwondo training for juvenile delinquents. One group did it as traditional taekwondo, explicitly oriented toward building character, respect, humility, perseverance, and honor, and they showed benefits. Another group did it just as a physical activity, a competitive sport. They actually got more aggressive and had more problems.” Intangibles like these – including the way the activity is framed, the character and tone of the trainer, and the fit between the type of training and the learner’s temperament – may indeed matter most of all.

As a challenge in the workplace, executive functions deserve more attention. Better inhibitory control is not sufficient, in itself, to make you a strategic leader; but it is a necessary prerequisite. Overall executive functions are especially important for ambitious, well-educated people, because they often use their intelligence to find excuses for their missteps and bad habits, and they may be entitled enough to feel justified in doing so.

Your background, upbringing, and schooling may or may not have given you the requisite level of skill in this domain. If not, your first year in a typical work-place may be a trial by fire, in which you learn to cope with pressure without “acting out.” As you advance, you may have to train yourself to recognize your own lapses in executive function – and to see how those lapses impair your ability to lead. Indeed, you may discover that the external things that irritate you the most are exacerbated by your own executive function lapses. For instance, you may have passive-aggressive colleagues with sharp tongues because they perceive you as failing to have considered their perspectives in the past.

If you want your entire enterprise to become more adept at executive function, you may have more leverage than you think. This mental activity responds to community support, and if you can create an immersive environment where people naturally encourage each other and support efforts to control inhibition and look at multiple perspectives, that will help create a workplace in which executive functions flourish. For companies that are wrestling with complex challenges, such as new domains of activity or recovering from ethical missteps, this could be an extraordinarily high form of leverage: to immerse managers in a corporate culture where it feels natural, and rewarded, to cultivate executive functions.

Art Kleiner, is a writer, consulting editor and business management expert in the New York area. Jeffrey Schwartz is a research psychiatrist at UCLA and the originator of the concept of self-directed neuroplasticity. Josie Thomson is an award-winning executive coach based in Brisbane, Australia, who has pioneered the use of neuroscience principles in working with business leaders around the globe. They are coauthors of The Wise Advocate: The Inner Voice of Strategic Leadership.