Quantum Mechanics and How We Shape Each Other

Recently, we were invited to help share the premiere of a film - Infinite Potential, the story of David Bohm. It's a fascinating film, available free on YouTube here. It explores the life and work of physicist David Bohm, who Einstein called his spiritual son and the Dalia Lama his science guru. The film explores quantum mechanics and one experiment, in particular, continues to intrigue me - the double slit. Essentially, when you observe the particles in the experiment the results change. I can not do justice explaining the experiment but found this video from The Royal Institution by Professor Jim Al-Khalili does an excellent job.

Below is an image of the double slit experiment where, in one case, without observation, the particle behaves and a wave, and when it is observed it acts as a particle. 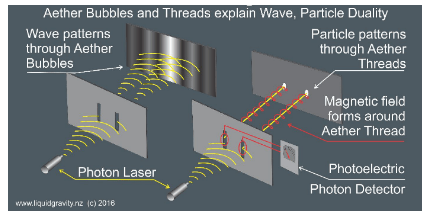 I have for a long time been fascinated and puzzled by quantum mechanics and this particular experiment. I'm not the only one; no one has actually figured out how this is working. And this includes the quantum physicists themselves!

I get a little suspicious when people throw quantum mechanics into their arguments since no one understands quantum mechanics, not even the quantum physicists. It's really easy to get all pseudoscience-y and use it to explain other things we don't understand and are trying to figure out.
So here I am, kinda doing what I just said, but not really. I'd like to examine a property of quantum mechanics, and show how it is similar to a psychological concept.  Spoiler Alert: I have not figured out the secret to life or consciousness.
The idea specifically I'd like to play with is superposition. In quantum mechanics, a particle can exist in multiple states at the same time. Once the particle is observed it "picks" one of these states. 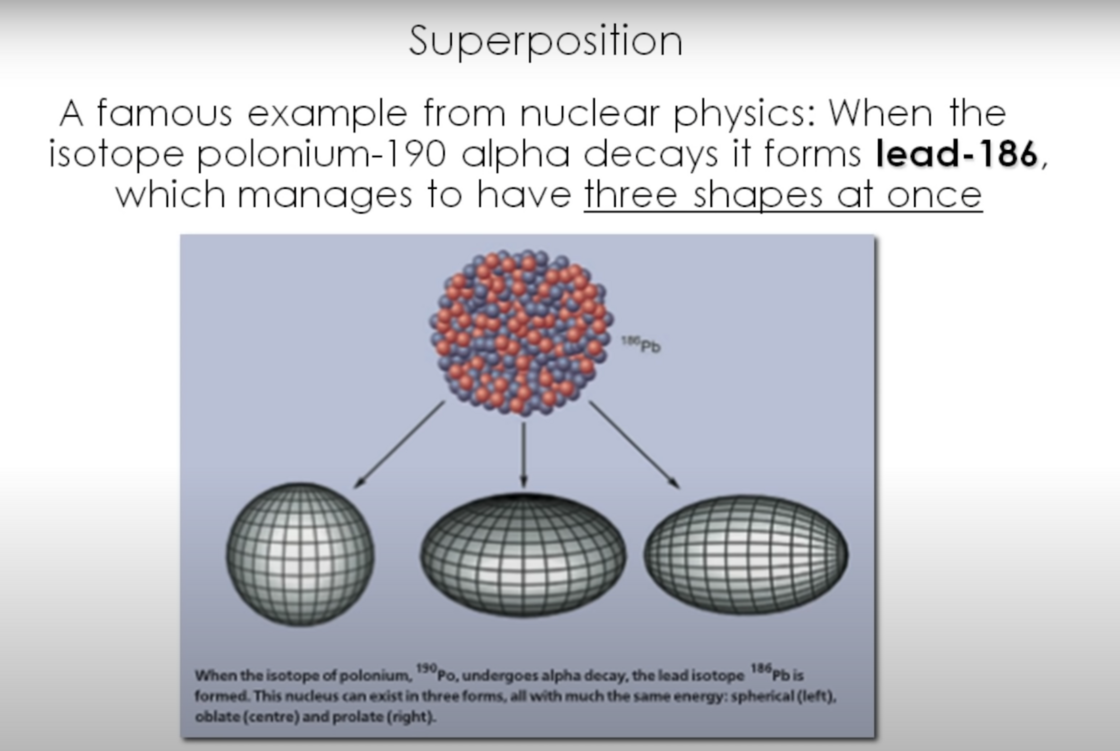 Image credit to this YouTube video.
When the nucleus of isotope polonium-190 alpha decays its form lead-186 has three shapes at the same time -  it can be a ball, a squished ball, and a rugby ball all at once. Once observed it picks a state. I find this idea of superposition fascinating, the idea that things exist in multiple states when unobserved, and then pick a state/shape when observed.
I'm been thinking about how I can say the same is true for me. That I show up in a different way when I'm alone vs when with others. There is something about being observed that has a striking effect on us internally. Who we are when we are alone/isolated is very different than who we are when we are with others.  And the degree to which we "shapeshift" varies from person to person and can change over time.
Have you ever noticed when you are around some people you act a certain way, and around another person, you act a different way? I'm not going to claim this is some quantum effect, but there is an interesting similarity. Just like particles, I think that when we are in isolation or alone we can be multiple "shapes" at once and that when we are observed by someone else we kinda snap into one of those "shapes".
Now, of course, it's a lot more complicated than that and we don't really need quantum mechanics to explore this. I remember very early when I started doing this work watching this random YouTube talk from a meditation teacher. In his talk, he essentially said that we are all creating our own movie in our heads where we are the director and everyone around us are actors. We shape the people around us to be the actors we need to complete our story. At the same time, we are an actor in their story and they shape us to fit.
I like to think of this almost like a gravitational pull. When we observe someone in a certain way (with judgment or expectation) we pull them towards that way of being, and when we are observed in a certain way we are pulled to be what they judge us to be or expect us to be. When these two are aligned (in a good or bad way) the pull is very strong and hard to stop. When the pulls are in opposite directions there is a great deal of tension.
What do I mean? Well, here is a quick example.  My son thinks the world of me. I am his favorite person in the "whole wooorldd" (as he would say). I know this and feel like I can express myself that way, that is the shape I take internally and that is reinforced externally. On the other hand, my whole life I've had a bias against airport security.  Growing up Iranian American in Northern Virginia in the '80s & '90s (think Iran hostage crisis) I would always think the guard was out to get me and judging me to be a terrorist. This was not completely made up, my relatives would routinely get put through extra security when arriving in the USA. When I felt most strongly that the security guard was out to get me I would more likely get searched and when I felt an easeful innocence I would more likely not get searched.
Where does psychology fit in?  A few years ago I discovered and got into the work of Carl Jung and found the concepts of persona and transference help understand these concepts - don't worry, there are no quantum mechanics involved but let me warn you, Jungian psychology could get pretty thick. The idea of the persona, according to Carl Jung, was "a kind of mask, designed on the one hand to make a definite impression upon others, and on the other to conceal the true nature of the individual."
Transference comes from Sigmund Freud's idea in his 1895 book Studies on Hysteria. Good Therapy explains, “transference describes a situation where the feelings, desires, and expectations of one person are redirected and applied to another person.”  Maybe we will explore these topics more in-depth in another article.
I wrote this inspired by the film and by what's going on right now.  How is our perception of one another shaping us? What internal narratives are we saying and how do these paint and then create the realities we are seeing? And how can we get out of this cycle? The practice of non-judgemental awareness is the best way I've found to try to see the "multiple-shapes" each of us is holding at once without forcing someone to take a shape, play a role, or become a persona. And silent, still isolation has been very helpful to me to see the many shapes I hold within without the interference or entanglement that comes from being observed by someone else.
Click here to sign up for our newsletter to stay up to date, get special offers, curated articles, free videos & more.
By Mindful Leader
Under Discovery
7 min read
Like
Share Tweet Share Pin it

Very interesting observations! Thank you for sharing your perspective; it has deepened my understanding of human relationships.

Thanks for your comment Dawn-Marie, happy this was of use!

Love. Love. Love ... that you combined quantum mechanics and meditation. As someone trained as a scientist who has a daily meditation practice, I find it very special you combined two of my keen interests. Well done. Never mind about the specifics of superposition, your observations about how we show up differently when observed is spot on.

Thanks for your comments Marilyn, glad to hear this resonated!

Mo, thank you for the invitation to watch Infinite Potential.  I don't have a physics background and found myself lost a few times, but overall the movie struck a lot of chords for me, particularly the interconnectedness of things.  As a therapist, I've noted how once someone observes themselves, it inherently changes the part being observed.  It's fascinating to see the parallels.  I appreciate your article which helped to demystify some of the science.  I'm going to watch it again.

Yes,  I these are two great observations from the film and can be topics for further exploration.  I get excited at the possibility of a deep level of interconnectedness being scientifically proved and accepted.

I've been "Very Lucky to have been in a Position Where Quantum (Mechanics), Physics, were used in a Meditation Situation, Completely Unique Experience !!  What a Door To Open for Observation ......

Interesting Kevin,  can you share what exactly you experienced? There is a great deal of pseudoscience in this field especially around quantum physics and I would be a bit skeptical.

I believe everything you are saying is true.