·
By Mindful Leader
·
Under Workplace Mindfulness 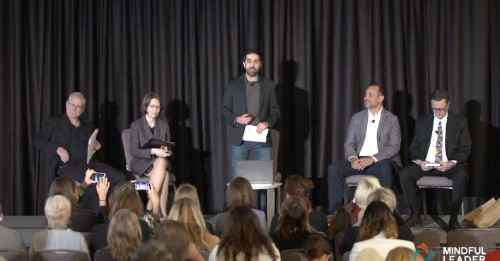 At the 2019 Mindful Leadership Summit, David Forbes and Rich Fernandez debated the question, is mindfulness changing capitalism, or is capitalism changing mindfulness?

At the 2019 Mindful Leadership Summit in Washington, DC, two critics and two pioneers of mindfulness met and debated. What happened during it was a fascinating look into different sides of the same issue with well-considered points and a wealth of detail. This was enough to make this one of the top-rated sessions of the weekend, with reactions that ranged from, "The debate was amazing!" to long, thought out opinions on the format and arguments, but one thing was clear: nobody who saw it could stop talking about it.

David Forbes, Ph.D. is a professor at the CUNY Graduate Center, where he teaches a course on critical mindfulness in education and helps K-12 teachers change the way they integrate mindfulness into their classrooms. Rich Fernandez, Ph.D., is the CEO of the non-profit Search Inside Yourself Leadership Institute, which offers mindfulness and emotional intelligence solutions to companies. They discussed the question: is mindfulness changing capitalism, or is capitalism changing mindfulness?

Here is the transcript of this short version of the debate:

Mo Edjlali: Incredibly excited about our next session here. We are trying something a little new. We've never done this before, and we've set up a conversation with critics and pioneers. For David and Rich, is mindfulness changing capitalism, or is capitalism changing mindfulness?

David Forbes: Okay. Well, perhaps it’s time we not just search inside ourselves but look critically at the surrounding system of capitalism and address our anxiety in that way. Capitalism has been and still is the unjust dominant corrosive economic system in which we live in and which permeates our consciousness, our way of life and our emotional and spiritual well-being.

Rich Fernandez: I believe that mindfulness together with empathy and compassion by promoting self-awareness as well as the awareness of the interconnection and interdependence of all things can actually serve as the moral and ethical foundation for business and for society.

To me, the question really turns on whether mindfulness in organizations, perhaps in business in particular, are a source of social degradation or social transformation.

That being said, I do believe that mindfulness, and again, empathy and compassion. You have to pair all of those together, those two wings of this kind of growing awareness as we call it, the bird of awareness one might say. Those are necessary but not sufficient to start to affect the kind of mindset shifts we would need to think about even taking on something like capitalism, but I think they are awareness practices. I think they do bring awareness to not only our own individual experience, so this is not just about Me Inc. as has been described in some of the McMindfulness criticism.

David Forbes: Claiming that a system now cares about everyone just doesn't make it so, and it ignores the systemic inequities of corporations. When it comes down to profit or human development, I'm not convinced that profit is going to have to win out. I don't think they can have both.

McMindfulness is a common term for the uncritical notion of mindfulness being used inadvertently often or unwittingly or even with good intentions in the service of capitalism or neo-liberalism. It basically promotes self-aggrandizement as opposed to letting go of the ego and for the well-being of all. Its therapeutic function is often to comfort, numb, and adjust and accommodate the self within the system based on private gain. It aims to reduce private individual stress and doesn't admit to any interest in the social causes of this stress, which is one of our main concerns.

Capitalism induces this need that many of us in mindfulness seek to alleviate, which is that sense that we're never enough. We're always feeling empty. We don't have enough. We're not ourselves. Capitalism loves that.

Rich Fernandez: It is no longer a sufficient approach, so let's just rest the debate. Neo-liberalism sucks. I agree with that. But we're talking about a new model, and I disagree with the fact that a stakeholder theory also is kind of like obfuscating or hiding the damage it's doing. A stakeholder model is not an extractive model to use Pilar Gerasimo’s expression yesterday. We're not talking about extractive economies here.

No good decisions are made from a state of fear and scarcity, so mindfulness, empathy, and compassion are necessary for good decisions and optimal judgment, and that's why they're valuable in business settings, and they're valuable as a lens through which to look at capitalism. They are not simply appeasing individual cogs in a broken machine. It's about looking at the machine itself as well.

David Forbes: To me, capitalism is a competitive system. If a corporation was forced to choose between profit and all those nice things you talked about, presence and human need, there's no way that I could be convinced that they wouldn't have to choose profit. Why? Because they have to stay in the game. That's the nature of the game. That's the system. You want to have it both ways. I think if a corporation had to choose between one or other, it's pretty clear that profit is what's going to have take precedence over that.

Click here to watch the full debate for more of their well-reasoned and thoughtful discussion, and to see the topic of mindfulness and religion discussed. Click here to see the other half of the shortened debate.

Is mindfulness changing capitalism, or is capitalism changing mindfulness? Do you agree with one of the debaters? Disagree? Share your thoughts with us in the comments.